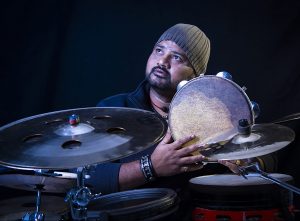 Selvaganesh Vinayakram grew up in a family of musicians. He is known for his performances, especially percussion instruments, including the kanjeera, and working with multiple musical genres from around the world. Selvaganesh’s recordings include Indian classical duets, Carnatic-meets-Hindustani hybrids, and jazz-fusion. He has composed scores and performed on numerous films’ soundtracks. Selvaganesh formed the group Arka, which explores rock with jazz and Carnatic elements. He also established the Vinayakram School of World Rhythms in multiple countries.