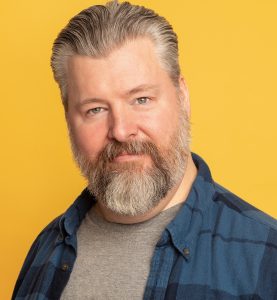 Most recently Jason Simon was seen as The Surgeon and Son of Stalin in the world premiere production of The Last Match: A Pro Wrestling Rock Musical. You might recognize Jason from PBS’ Great Performances as Dick Dead-Eye in HMS Pinafore, Cleopas in Easter Mysteries, and the Maitre’d in Susan Stroman’s production of The Merry Widow at the Metropolitan Opera, or as Sheriff Vallon in the Live from Lincoln Center NY Philharmonic’s concert of Show Boat. Other TV/Film: BULL, An Angry Boy, Little Voice, Spongebob Squarepants: Sponge Out Of Water, White Collar, Exploitation, and I’d Kill For You. Plus a multitude of characters/voices in many commercials, movies, and video games. Nat’l tours: Sister Act, Wizard of Oz, The Producers, CATS!, The Scarlet Pimpernel, and Funny Girl. Regional: The Metropolitan Opera, The Guthrie, Gulfshore Playhouse, Cape Playhouse, Fulton Theatre, MSMT, Barrington Stage, Ogunquit Playhouse, The Argyle, Weathervane, Seaside Theatre, Merry-Go-Round, and was a founding member of Festival 56. Love and thanks to my beautiful wife, Tara!
www.jasonesimon.com