The University of Wisconsin–Madison Arts Institute, the School of Music, and the Office of Multicultural Arts Initiatives (OMAI) within the Division of Diversity, Equity, and Educational Achievement welcomed legendary Afro-Cuban musician Juan de Marcos González as the Fall 2015 Interdisciplinary Artist in Residence.

Grammy Award winner Juan de Marcos González is a central figure in Cuban music. His work with the Afro-Cuban All Stars, the Buena Vista Social Club, Ruben González, Ibrahim Ferrer, Sierra Maestra, and others has made an extraordinary contribution to raising the profile of Cuban music throughout the world.

This is an accordion element with a series of buttons that open and close related content panels. 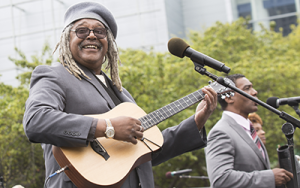 Grammy Award winner Juan de Marcos González is a central figure in Cuban music. His work with the Afro-Cuban All Stars, the Buena Vista Social Club, Ruben González, Ibrahim Ferrer, Sierra Maestra, and others has made an extraordinary contribution to raising the profile of Cuban music throughout the world.

Juan de Marcos was born in Havana in 1954 and grew up surrounded by music (his father, Marcos González, was a singer and played with the great Arsenio Rodríguez). He studied classical guitar at the Conservatorio Amadeo Roldán and tres guitar at Conservatorio Ignacio Cervantes—both in Havana, and privately with the great maestros Vicente González Rubiera and Leopoldina Núñez. He also studied contemporary harmony and orchestral conducting at Goldsmiths – University of London. Besides his musical studies, he has degrees in engineering (with a focus on hydraulic engineering) and Russian and English languages along with a doctorate degree in agronomical sciences.

In 1976, while studying engineering and music, he co-founded the group Sierra Maestra. Styled as a traditional Cuban septeto group (tres, trumpet, bass, percussion, and vocals), the dynamic young band’s aim was to bring about an appreciation of Cuban son (musical and dance style) to the youth of the island. The band achieved great success and recorded fourteen albums in Cuba, Africa, and Europe, toured many countries, and received various awards.

In 1996, Juan de Marcos formed the The Afro-Cuban All Stars as a way to promote/celebrate the “golden age” of Cuban music from the 1950s. Their album “A toda Cuba le gusta” (Grammy Nominee ’98) was the first to be recorded in the now famous Buena Vista Social Club sessions and Juan de Marcos proved to be a springboard for the success that came up. Following the album’s release, Juan de Marcos led the Afro-Cuban All Stars and The Ruben González Ensemble on their debut European and U.S. tours and directed the Buena Vista Social Club at top performance venues worldwide including Amsterdam’s Le Carré, New York’s Carnegie Hall, and Mexico City’s Auditorio Nacional.

His work has been nominated for multiple Grammy Awards and once for a Latin Billboard award, and his Afro-Cuban All Stars were voted “Best Beyond Band” by DownBeat magazine. During his career, Juan de Marcos has arranged, conducted, produced/co-produced, and/or performed on more than twenty-five albums, some of the albums, “Dundunbanza” (Sierra Maestra, 1994), “A toda Cuba le gusta” (Afro-Cuban All Stars, 1997), “Distinto, diferente” (Afro-cuban All Stars, 1999), “Introducing Ruben González” (Ruben González, 1997), “Buena Vista Social Club presents Ibrahim Ferrer” (Ibrahim Ferrer, 1999), and “Buena Vista Social Club” (1997), have been acclaimed as key cultural Cuban productions. In 2000, he was honored with his friend Nick Gold, Owner of World Circuit Records label, the first WOMEX (World Music Expo) Award in 2000.

The Juan de Marcos residency was sponsored by the UW–Madison Arts Institute and was hosted by the School of Music and Office of Multicultural Arts Initiatives (OMAI). OMAI proposed the Juan de Marcos residency to coincide with the program’s 10th anniversary celebrations. His residency was cosponsored by the Afro–American Studies Department; the Department of Art History; the Dance Department; the Art Department; the Latin American, Caribbean and Iberian Studies Program; and the A.E. Havens Center for the Study of Social Justice. Community partners include the Greater Madison Jazz Consortium, the Dane County Cultural Affairs Commission (Dane Arts), the Madison Arts Commission, 100state, and the Overture Center for the Arts. The Art Institute’s Interdisciplinary Arts Residency Program is made possible by funding from the UW–Madison Office of the Provost.

Special thanks to Focal Flame Photography and Hinckley Productions. 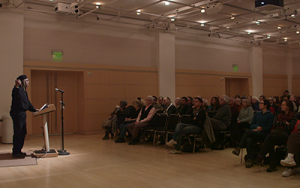 Special Continuing Studies Workshop Opportunity
Title: Latin American String Ensemble: A Performance Workshop
Instructors: Gliceria González Abreu and Mikko Utevsky
Day/Time: Sundays September 13-October 18, 2-4pm
Location: Humanities 1321
Final performance: Sunday, October 18, time/location TBD
Cost: $50
Registration: Call 608-262-2451 or register online by September 6, 2015
Description: Explore the classical side of Cuban music with a member of the Afro-Cuban All Stars. This 6-week class will be a chance for players on bowed string instruments (violin, viola, cello, bass) to learn a few selections from Cuba’s centuries-long tradition of classical music with Gliceria Gonzalez Abreu. Pre-requisite: intermediate string-playing skills. This is a project of the Division of Continuing Studies and is co-sponsored by the Arts Institute, the School of Music, and Latin American, Caribbean and Iberian Studies. Support provided by the Anonymous Fund.
Instructor Biographies: Gliceria González Abreu is a pianist and orchestral conductor. She has led classical music ensembles in Cuba, Mexico, and the US. González also works in popular music, singing backup vocals and playing keyboards and vibraphone with the Afro-Cuban All Stars. Madison native Mikko Rankin Utevsky is the conductor of The Studio Orchestra and the Madison Area Youth Chamber Orchestra. He is also active as a violist, baritone, and music critic for the Well-Tempered Ear.

Madison World Music Festival, featuring performance by Pellejo Seco. From Algeria to Ethiopia, South Korea to Cuba and beyond, the 12th Annual Madison World Music Festival has many styles and groups to explore and enjoy, each bringing something unique to the table.
Founded in the East Bay area of California in 2004 by Ivan Camblor, various critics have heralded Pellejo Seco as the next Buena Vista Social Club. This eclectic group has its roots in traditional Cuban music. The group intertwines progressive fusion rock, jazz, Latin pop, Brazilian, flamenco, and Afro-Cuban music for a creative sound. Juan de Marcos González will introduce the group and join them for a few songs on stage.

Lecture featuring Telmary Diaz: “Hip Hop in Cuba”
Topics covered will include: Belafonte, Castro and the Black Panthers; background and evolution; the Alamar Rap Festival; first remarkable groups; the Association Hermanos Saiz and the Cuban Rap Agency; decline of the Hip Hop and the Reggaeton Revolution

Wisconsin Science Festival, featuring performance by the UW-Madison Latin Jazz Ensemble. The UW-Madison Latin Jazz Ensemble is a small student ensemble performing music of the Latin-American jazz diaspora, with an emphasis on the rhythmic traditions of Cuba. Directed by Eric Siereveld, the ensemble will perform material arranged for them by Juan de Marcos González, who will be in attendance to present the ensemble’s performance.

Lecture: “Cuban Composers: 18th Century to Today”
Topics covered will include: The music of Esteban Salas and Jorge Paris; the Cuban Symphonic Music and its evolution in the Twentieth  Century; Amadeo Roldán and the use of the Afro-cuban liturgic music; Alejandro Garcia-Caturla; Jose Ardevol and the Musical Renovation Group; contemporary composers